Starting with the RHT (Retractable Hard Top) around which the entire car was developed, every area of the 488 Spider has been designed to set new technological benchmarks for the sector.

The result is the most powerful and innovative Ferrari Spider ever built, a car that marries the extraordinary prowess of the 488 GTB coupé’s mid-rear V8 with the joy of tackling even the most challenging roads surrounded by nature’s heady aromas and colours and accompanied by an inimitable Ferrari engine soundtrack. At the very heart of the car is, of course, the 3902cc turbo-charged V8 which set a new benchmark for this type of architecture. Thanks to a maximum power output of 670 CV and smooth, progressive torque delivery in the higher gears by the Variable Torque Management system, the 488 Spider sprints from 0 to 100 km/h in 3 seconds flat and from 0 to 200 km/h in 8.7 seconds.

To achieve this engaging handling balance the mechanical set-up was honed in tandem with the electronic systems which now include the evolved version of Ferrari’s side slip angle control system (Side Slip Control 2 - SSC2). Over all, in fact, response times are 9% more rapid than the previous Spider.

Clearly, the choice of a rigid hard top was essential to the character of the new Ferrari, guaranteeing a significant improvement in in-car comfort. The RHT was a world first for a mid-rear-engined car when introduced on the 458 Spider.

Designed by the Ferrari Design Centre, the 488 Spider features radical new styling honed around its aerodynamic requirements, brilliantly reflecting the drop-top driving pleasure focus of its sportiness and performance.

The 488 has classic Ferrari mid-rear-engined sports car proportions: a short muscular front wing into which the bumper is wedged which lends the whole front of the car a sense of power and speed, and immediately draws the eye to to flanks featuring new side air intakes for the intercoolers.​

The motif of the subtle crease line that forms the scallops on the door leading to the intakes is a nod to the 308 GTB.

The front is characterised by a single grille opening. The bonnet has a pronounced, raised central section and two side channels which channel air from the two vents in the bumper.
The engine cover features longitudinal ribs which generate a three-dimensional, dynamic effect and are flanked outboard by sculpted mesh grilles.

The 488 Spider also debuts a new colour designed to enhance its sleek yet muscular forms. The Blu Corsa livery also almost seems to meld with the sky overhead.

The 488 Spider’s cockpit was designed to underscore Ferrari’s Formula 1-inspired philosophy of creating a seamless relationship between driver and car: the commands not clustered on the steering wheel are on the wraparound satellite pods which are angled directly towards the driver. The new lighter, horizontally more compact dashboard also curves around the cockpit and features ultra-sporty air vents.

The overall result is an effortless marriage of innovation and tradition. The design references typical Ferrari traits, such as the clear separation between dashboard and tunnel, the multifunctional steering wheel and the control bridge on the tunnel.

The 488 Spider’s new door panels are the fruit of meticulous work that centred around quality and attention to detail. They are now more comfortable to the touch and the armrest is more ergonomic.

Great thought also went into the new seats which have fixed headrests.

Aside from integrated Apple CarPlay, the 488 Spider also boasts a new Sport infotainment system with the display still part of the instrument cluster in the driver’s line of sight, following the cockpit’s philosophy of ergonomic and aesthetic integration with the various functionalities immediately to hand.

The 488 Spider’s also features keyless start so that the car can be started or turned off by simply pressing the “Start/Stop Engine” button on the steering wheel.

Regardless of the model or its mission, the heart of every Ferrari is its engine which must, of course, deliver the classic Ferrari power unit qualities: blistering performance combined with high revs, razor-sharp responsiveness, powerful acceleration at all speeds and an exhilarating soundtrack. The new V8 sported by the 488 Spider is the Maranello engineers’ latest response to the daily challenge to constantly set new benchmarks of excellence.

This power unit is the Prancing Horse’s most high performance engine ever with zero turbo lag and a unique, exhilarating soundtrack.

Normally, turbos have a significant impact on throttle response times: turbo lag increases with power resulting in response times that can be two to three times longer than in a naturally-aspirated engine. Maranello’s engineers have overcome this obstacle.

In fact, although this engine is 100 cv more powerful than the previous Spider power unit, it has a response time of just 0.8 seconds, guaranteeing the instant responsiveness to the accelerator typical of Ferrari power units.

A whole slew of features contributed to the engine’s exceptional response times. The turbos are on ball-bearing-mounted shafts, while the compressor wheels are in TiAl, a low-density titanium-aluminium alloy. Additionally, the twin-scroll turbines are designed and built to maximise power.

There was a huge focus on efficiency in all areas of the car, starting with combustion: new high-tumble intake ports, 200-bar direct fuel injection, an ECU that controls ignition timing and adaptively predicts misfires, and multi-spark function.

Every Ferrari has its own unique and distinctive soundtrack and the 488 Spider is no exception to this rule. The new V8’s soundtrack is seductively full and powerful even at low speeds and increases in volume and clarity as revs rise, underscoring the engine’s exceptional responsiveness, torque and performance. Seductive but never invasive when the top is down thanks to the exhaust headers with longer, equal-length tubing and the flat-plane crankshaft, the sound was further enhanced by an in-depth study of the harmonics and tonality at different engine speeds, another area in which Ferrari has always excelled.

Minimising drag and maximising downforce are normally two mutually exclusive objectives in aerodynamics. However, the Prancing Horse’s engineers have excelled themselves once again with the 488 Spider, by reconciling the two goals. The result is an aerodyanamic efficiency figure of 1.53 a new record for a Ferrari production Spider.

The front of the car is dominated by the central Aero Pillar and an F1-inspired double spoiler.

The Aero Pillar has the job of managing the powerful air flows striking the front of the car and distributing them along both the longitudinal and transverse plane.

The 488 Spider has an innovative aerodynamic underbody that incorporates vortex generators, special curved aerodynamic appendages which accelerate the air thereby reducing pressure. The result is that the car’s underbody is “sucked” down to the ground and downforce is higher but drag is not. The front section of the underbody is flat, generating downforce, which pushes the car lower to the ground whilst having the smallest possible impact on the flow arriving at the front strakes.

The large rear diffuser has curved fences which optimise the expansion of the huge amount of air channelled under the car.

The blown spoiler is a new Ferrari-patented solution. Air enters an intake at the base of the rear screen and exits via the bumper. This geometry enables the surface taking the aerodynamic load to have a more pronounced concave curvature which, in turn, increases the upward deflection of the flow, thus boosting downforce. This solution avoids having to extend the height of the rear spoiler and thus helps keep drag low.

The base bleed air intakes on the car’s sides are divided by a central flap. The flow over the upper part of the flap, which is also used for the engine air intake, is deflected and exits from the tail area to reduce the drag caused by the low-pressure wake directly behind the car.

The 488 Spider’s design was adapted to efficiently meet the typical the demands of Spider driving and use. Its dynamic behaviour is effortless on even the most challenging routes, underscoring the feeling of ease in driving on the limit. Over all, response times are 9% more rapid than the previous Spider without any compromising whatsoever on comfort.

This is the result of the unique specialist vehicle dynamics knowledge Ferrari has built up in competition and which led to the adoption of a sophisticated simulator, similar to the one used by the Formula 1 Scuderia.

PERFECT FOR EVEN THE MOST CHALLENGING ROADS

The evolved version of Ferrari’s side slip angle control system (SSC2) delivers 12% faster longitudinal acceleration out of corners than the 458 Spider.

The 488 Spider’s excellent dynamics are due in part also to the SCM3 magnetorheological damping system. The dampers have new piston rods to reduce friction for more efficient control which translates into a feeling of greater body control with better bump absorption.

The latest evolution of the ESP guarantees even more efficient ABS intervention in low-grip situations.

Thanks to the new Brembo Extreme Design braking system, the 488 Spider’s stopping distances are 9 per cent shorter than the previous model. Derived from the LaFerrari, the brakes also have new callipers that feature new materials that ensure they reach optimal operating temperature faster and are more durable. 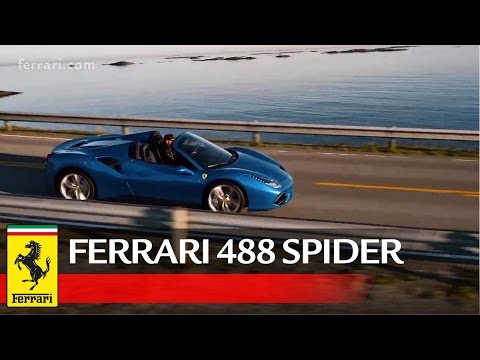